Regularisation campaigns are useful to spark debates around migration policies and can lead to further debating of these policies both on the European as on the national level.

It is in the cities that these campaigns are set up and where migrant groups mobilise their communities. This poster shows two examples of city organised and migrant-led regularisation campaigns. 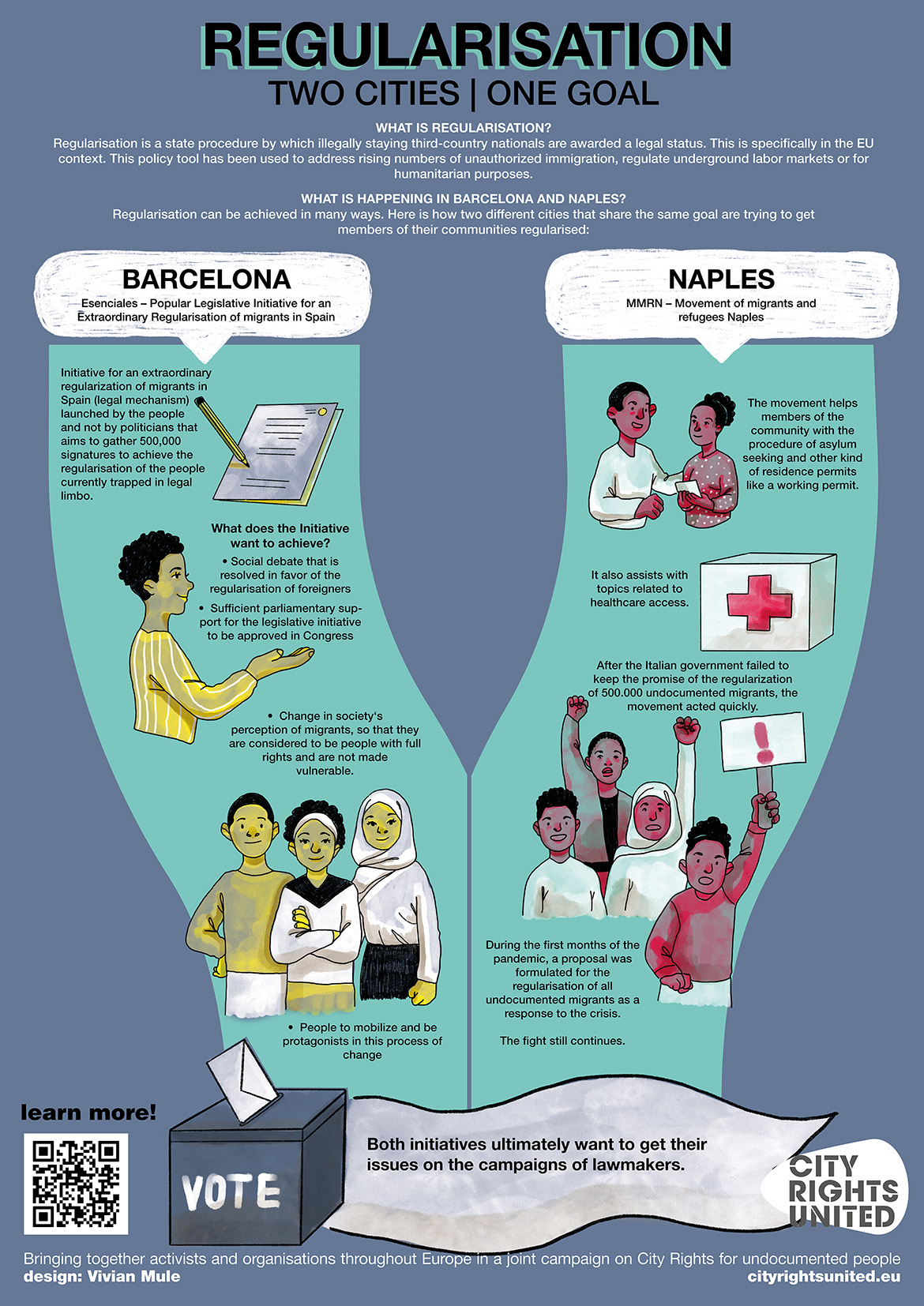 The rejection by the Congress of Deputies of the Proposición No de Ley drafted by #RegularizacionYa was, a historic missed opportunity that turned its back on the rights of hundreds of thousands of people. This result has been accompanied by an upsurge in racist raids, the announcement of the reopening of the CIES and the new European migration framework that keeps institutional racism in the DNA of European and state policy. For our part, after the political assessment of the previous communiqué on the course of the PNL, we would like to share what we consider to be the advances achieved by the State Movement #RegularizacionYa during these months of the struggles of organisations and migrants in this country. “A lot of hard work was put into organising, communication, legal and political work. Defining strategies, working all possible strategic alliances, positioning #RegularizacionYa in the social debate inside and outside our communities”.

THE BEGINNING: A SEED THAT Sprouts In March, just a few days before the start of the confinement, Portugal regularised hundreds of thousands of migrants. By then, different migrant groups in Spain had been preparing proposals for regularisation, in some cases with initiatives at the regional or sectoral level. Faced with this, the need to join forces became evident. A few weeks later, we managed to draw up a Letter to the government, which constituted our political agenda, in which we demanded urgent, permanent and unconditional regularisation for all migrants. And with it We gained the support of more than 1500 organisations throughout the state. From there, we set in motion arduous organisational, communication, legal and political work. Defining strategies, working on all possible strategic alliances, positioning #RegularizacionYa in the social debate inside and outside our communities, refining our proposals and identifying gaps and political objectives, taking into account that we started with very limited material resources and a conviction: this time it will be migrants who take the reins in the struggle for our rights. “It was very frustrating, on the other hand, to confirm resistance from political forces that call themselves progressive and were disappointed by their indifference and harshness in dealing with issues that for us mean life and the starkest daily reality. The second step was to point out a contradiction in the government’s flagship proposal, which did not include the more than 600,000 people in an irregular situation who had been doing mostly essential work as recipients of the Minimum Living Income. Despite the arguments we put forward to the government through different channels, the MVI left out this group, one of the most vulnerable and at risk of social exclusion, which undoubtedly limits its effectiveness in reducing inequality and poverty. Shortly afterwards, in the framework of the Economic and Social Reconstruction Commission of the Congress, we made our presence felt with the reading of the document “Our poverty, your debts” and thus managed to place #RegularisationNow without conditions in the political debate.

We have also been able to look at the women who have remained in the CETIs in inhumane conditions, who have experienced preventable contagions due to confinement and who are now at risk of being transferred to the CIES and potentially repatriated to contexts of greater exposure and against all the recommendations of international human rights organisations; the sex workers who were promised that they would be allocated aid and who find themselves exposed to sexual exploitation and hunger; the street vendors who continue to suffer police persecution for seeking a livelihood in their irregular condition. While this is happening, we have taken a short pause to look at our path, in which, learning as we go along, anti-racist, anti-patriarchal action and the politics of care have tried to be central keys to building an articulation between people who come from different countries, inhabit almost all the territories of the state and face daily exploitation, racist raids, scarcity of resources, the “nos” of bureaucracy, police violence and the daily struggle to survive in the midst of the policies of death of this state. The horizon: We embrace each other in the struggle. The work of the spokespersons of the movement has been extraordinary, as they have embodied the voice of thousands of comrades and sisters and brothers and sisters and have presented in different forums, some of them very difficult, their experience in first person and defending the demands of their collectives and of the whole movement. We want to thank and embrace the sisters, brothers and sisters who, from the streets and the networks, have been accompanying us in the defence of each step of this process, contributing with their initiatives and creativity.

We will continue to work for RegularizacionYa, for the rights of migrants in this country and for a migration regulatory framework of rights and not of exploitation. Without struggle; there is no victory!

The announced regularisation of undocumented immigrants did not work: One of the measures on which there were more expectations with respect to the migration policies of the last government was the regularisation of foreign workers employed in the agriculture and in the care sector (implementation in May, June, July and August 2020). The measure was supposed to regularise an important group of the approximately 500.000 undocumented migrants present in Italy in order to facilitate their access to healthcare, protect the health of all and ensure that certain sectors considered essential would not be left without workforce.

But after six months, the measure seems to have stalled: a report written by the Ero straniero network shows that only 1,480 residence permits have been issued out of 207,000 applications submitted. “If the regularisation times were like these, it would take decades to complete all the paperwork,” says the organisation, which asks the Ministry of the Interior to speed up the procedure so as not to thwart the reform. The fear is also that undocumented migrants will be cut off from treatment and vaccines, at a time when the risk to everyone’s health is even higher.

Many, however, had already denounced the weaknesses of the reform at the time of its approval, first of all because it was an extraordinary measure whose aim was to remedy the problems created by an obsolete law such as the current immigration law, which dates back to 2002 (the so called legge Bossi-Fini). The immigration legislations in recent decades have been characterised by recourse to amnesties and extraordinary measures that have avoided tackling the root of the issue. As the historian Michele Colucci wrote: “If we want to learn some lessons from recent history, we must also accept that regularisation alone cannot be sufficient to deal with the current situation, which risks recurring after a certain period of time, and a measure limited to agriculture alone, as seems to have emerged in recent days, would certainly be even less decisive.”

Without an organic reform of Italian laws on immigration, asylum and citizenship, it will be difficult to resolve the issue of the invisible, undocumented migrants in the long term. As the Ero straniero report concludes, it is necessary to introduce work entry channels that facilitate the matching of Italian employers with third-country workers without forcing those who migrate to do so through increasingly dangerous irregular routes.

During the first months of the pandemic, as Migrants and Refugees Movement of Naples, we have formulated a proposal for the regularisation of all undocumented migrants as a response to this crisis. The proposal contains:

The emergency permit would become part of our legal system in line with our constitutional charter and would mark a new path on issues that are too often treated with a security attitude, forgetting to give centrality to the human being and his dignity.

We also believe that this permit should be issued to people with a criminal record, given the aims it pursues, which are to protect the health of the community as well as the individual, and given the impossibility of repatriation. All of this is because we are not dealing with arms that simply serve to fuel the markets, but because the need is to consider every life of equal value, which every state under the rule of law should consider a primary asset.